For fairness we do NOT publish the video of the terrible accident
The temple of speed at Spa has become the scene of a new drama of motor racing. Shortly after the start of the Formula 2 race, an accident involved three single-seaters and his frightening dynamics immediately made it clear how serious it was, confirmed in a short time by the communication of the death of one of the three drivers involved, the 22-year-old French Anthoine Hubert, from the Arden team, at the first season in the category.
His single-seater crashed on the barriers on the side of the slope leading to the Raidillon and bounced off the track, being rammed and broken in two by another competitor, the Ecuadorian Juan Manuel Correa, seriously injured with fracture and relationship to his legs and hospitalized in Liege. Slight consequences, however, for the third driver, Giuliano Alesi, son of the former Ferrari driver Jean, controlled at the circuit’s medical center.
The race was on its second lap but was immediately canceled, while the FIA ​​has already verified an accident on the causes they determined. On that point of the Formula 2 single-seater’s track, they reach speeds of over 250 km and the clash between the car, now unattended by the French and the one that arrived in full America, was devastating.
The dynamic recalled what in the Lausitzring involved Alex Zanardi in 2001, when his Trolley car was centered on the side of the front part of the Canadian Alex Tagliani and remained broken, causing the amputation of both legs of the Italian driver. For Hubert, the impact was instead fatal. The young man born in Lyon turned 23 in less than a month, on September 22nd, and a few months ago he had dreamed of getting on a Formula 2.
He had already won two races, in Monaco and Le Castellet, accumulating his palmares that already included the title of French champion F4, won in 2013, and that of GP3 won last year with the French team ART Grand Prix, in his second season in the category. Since May last year, before the Renault Sport Academy, a sign that it was considered one of the promises of motoring from beyond the Alps.
The conditions of Correa, hospitalized in the Liege hospital, are serious but stable at the moment. He was very young, 20 years old, and in the first season in Formula 2 after two years in the GP3. On the track there was also Mick Schumacher, who in the evening posted a sentence for Hubert on Twitter, with a photo that shows them together: “Destiny is brutal. The loss is infinite. Anthoine, we miss you already », writes the son of Michael Schumacher, devastated like many other pilots who competed with the French and joined the grief and grief of the family.
Also in the evening, Formula 1, Formula 2 and Formula 3 released a joint statement expressing “profound sadness” over the death of Anthoine Hubert, a person “kind to everyone, always smiling and with contagious positive attention”. “We would like to extend our heartfelt condolences to the family, loved ones and friends of Anthoine and send our heartfelt condolences to the entire Arden team.” Obviously tomorrow’s F2 race was also canceled. 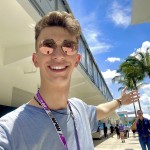